What is a Clamping Head?

You are in the Press Review section. Click here for News. 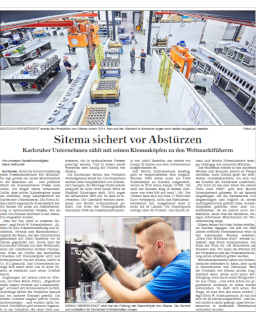 SITEMA protects against crashes
Karlsruhe based company is among the world market leaders with their Clamping Heads
It is the horror scenario of every press maker: a worker puts a new workpiece into the machine, and suddenly the massive press crashes down. The consequences would be devastating.
To make sure that such catastrophes almost never happen, mainly one Karlsruhe (Germany) based company is responsible. Company SITEMA produces so-called Clamping Heads. They often serve as mechanical restraint devices in hydraulic presses, as they are manufactured e.g. by Schuler and used in different industries worldwide.
Published in the newspaper BNN of 11 October 2019 - issue 236 - page 7
Complete article as pdf file (German language)

We use cookies to offer you the best services for your visit at our web site. Basic cookies enable fundamental features and are required to ensure the proper functioning of the web site. If you continue using our web site, you agree to the usage of these cookies. Additionally, services of other service providers are integrated into this web site. These additional services are Google Maps and Google reCAPTCHA which are needed for our inquiry forms. For these services, cookies are placed as well. Here, you can refuse these cookies. You can always change this decision by adapting the Cookie settings. SITEMA uses no additional cookies, especially no cookies for advertising purposes or social media. For more information, see our